Brought to you in collaboration of KINDUZ Consulting.
Reliability of refinery equipment significantly effects the Gross refinery margin and overall safety of the refinery. One of the key equipment is the power source of a refinery: Turbines.

This case sory tells about how a two member team reduced the Gas Turbine trips through a structured data driven problem solving process.

The Petrocham Oil Refineries Limited (Name changed) is a fortune 200 company, with it’s headquarter in India. The refinery has many units/plants to process and refine crude oil and produce products like petrol, diesel and other petrochemicals; moreover, the electricity supply to these units are from captive power plants which generate electricity through Gas turbines. PORL meets its majority of in-house power demand through two Gas turbines named as GT1 and GT2. The GT1 supplies 21.98 MW and it was commissioned in 2007 where as GT2 supplies 34.5 MW and was commissioned in 2011.

Although the GT2 was the new one, there were frequent trips reported in GT2 compared to GT1. Therefore it was the great issue for the top management of PORL. General Manager, Maintenance of PORL assigned this problem as a Six Sigma Green belt project to a team of 2 member (Mr. Shankar, Mr. Rahman).

Let’s see how the team ensured high reliability for PORL and how the Lean Six Sigma tools and techniques helped the team!!

The team took a Gemba walk of the Gas turbine plant and interviewed several peoples from operation and maintenance department. The same is described below as a conversation.

Shankar: What are the issues you are facing with GT2 now?
Manager, operations: We are facing leak issues frequently and there is no proper trouble shooting procedure for the same.
Shankar: What type of leaks are there in GT2?
Manager: Ferrule joints leak, turbine compartment leak and hydraulic oil leak in tubing
Shankar: How do you come to know that a leak has happened?
Manager: We have regular inspection procedure which helps us to find leaks in the system
Shankar: Okay, Thank you. Will get back to you for further discussion if required.
Team further interviewed manager, maintenance.
Rahman: What are issues you are facing with GT2 now? And how you are resolving them?
Manager, maintenance: We are frequently stopping GT because of leaks. The flow divider also gets frequently stuck. Whenever the GT starts, mostly flow divider gets stuck. In that case, we have to change the flow divider which is also costly.
Rahman: Would you know why flow divider gets stuck every time?
Manager: I think it is because of liquid fuel operation.
Rahman: Thanks for the inputs. Let us come back to you.

Team was happy that they got the root cause which could be either leak problem or flow divider stucking.

Team came to meet the coach and shared the inputs and recommended solutions for the same. 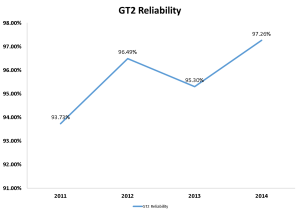 It is very clear from the figure 1 that reliability has increased significantly from 2011 to 2014. Team further compared the reliability of GT2 with GT1. A graphical representation of the same is given below. 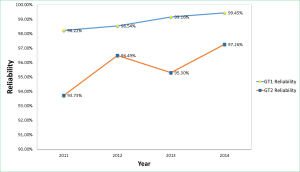 Figure 2: A graphical representation of comparison between reliability of GT1 and GT2 for a period of 4 year

As it is shown in figure 2, reliability of GT1 was higher than GT2. And reliability of GT1 has been increasing constantly since 2011. Team was determined that there is some difference between GT1 and GT2. On further study it was found that the type, make and supplier of both the GTs were same.

All trips and stoppages of GT2 were checked for the last 4 years. It is very clear from the figure 2.2 that most of times, trips & stoppages were due to mechanical reasons.

Figure 3: A graphical representation of breakdown pattern of GT2 for a period from FY 2011 to FY 2014

The major mechanical reason for GT2 trips and stoppages were leaks. Probable causes for leaks were identified with the help of Fishbone Diagram as listed below. 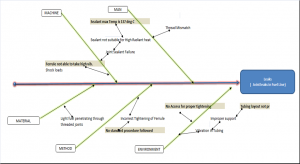 Figure 4: Fishbone diagram for the “Leaks” of GT2

The other major reason was firing issue. Team brainstormed and populated fishbone diagram with probable causes for firing issues of GT2. 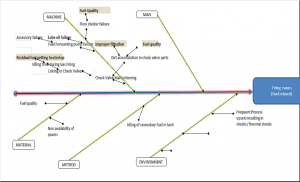 Figure 5: Fishbone diagram for the “Firing issue” of GT2

Coach recommended team to conduct a Failure Mode Effect Analysis to check other possible causes of GT2 trip. A sample FMEA is shown below:

From the FMEA, it was found out that ferrule leaks and power failure to auxiliary system were the major failure modes for the GT2.

To avoid the Power failure to auxiliary systems, it was recommended to procure new Battery Banks for GT2 Mark VI.

To remove the potential unreliability factors existing in the system, following solutions were recommended.

Total financial benefits from the project was 3.66 Crore per annum.

There were two key learnings from the project. Firstly, one should rely on Gemba walk and fact finding to resolve a problem. Often what others think and the actual cause are different. Secondly, if you want to quickly find out solutions for improvement in any process or equipment, find a similar process or equipment which performs better. In our case, the team could always go back to GT1 (which had higher reliability) and see what was different in it and recommend improvements in GT2 easily.