The Energy Problem Of Crude Distillation Unit Of A Refinery

Brought to you in collaboration of
KINDUZ Consulting
This is a case story from Petrocham Oil Refineries Ltd (PORL) (name changed). This story communicates the key message that data collection should be correct otherwise results may defer. It is good to check the measurement system before collecting data.

Background of the project
PORL presently has a crude oil processing capacity of 9.5 MMTPA (Million Tons per Annum) in its two Crude Distillation units (CDU). Crude oil is first processed in the CDU where it is heated in heaters depending on the type of crude oil after removing impurities such as sodium and magnesium salts, water and other sediments. Crude oil is then fractionated in a distillation column where lighter fractions such as LPG, Naphtha, Kerosene and Diesel are separated.

In one of the CDU of PORL, Crude is heated in two heaters named as CH1 and CH2 and then crude is fed to the main fractionating column. To heat the crude, air is supplied to heaters by two Forced draft (FD) fans. These fans are driven by High tension motors with Fluid Coupling (scoop loading mechanism) for transferring energy from motor to fan. By varying the scoop loading, air supply is maintained.

As design data of FD fans, each fan share 50% load, and in case of failure of one FD fan, the other goes to full load. As both FD fans were running in parallel, there was high energy consumption in the CDU.

So, as a Lean Six Sigma Green Belt project, the problem was given to a team of 2 Petrocam employees (Mr. Ramesh and Mr. Suresh). Let’s see what the team found out.

Team did a Gemba walk to CDU and interviewed few persons. Below is the summary of what they said.

CDU In-charge: “We need to ensure a 120t/hr air to heaters for proper combustion”.

Panel In-charge: “Scoop loading of each FD fan is less than 50% which is leading to energy wastage” (

Panel Operator: “Maximum load of fan should not exceed 39.5Amps“

Maintenance department: “There are many air leaks which leads to high energy consumption. And the discharge damper is not fully close also.”

After getting inputs from all concerned persons, the team met their Six Sigma project coach and explained the issues.

The coach asked, “Why are we running both FD Fans on 50% load when we can get the same air requirement from one FD fan running on 100% load?”

Ramesh replied, “Yeah, it can be done but there will be reliability issues if we run only one FD fan. Now if one FD fan trips, other take the full load”

The coach replied, “Okay!! But why Scoop loading for each fan is around 50%? We are wasting rest 50% energy here.”

Ramesh replied, “We cannot supply air more than the requirement. We need to maintain the ratio of air flow to crude throughput of heater at 0.18. If this ratio increases, heater will be smoky.”

Coach replied, “Correct. What about the maximum load of fan? Is it exceeding 39.5 Amp?”

Ramesh replied, “We need to check this. We will collect data and come back to you on this.”

Team further analyzed the issues with the Coach and decided the CTQ as “Energy consumed/hour by both FD Fan motors in CDU heater”.

Team collected the data and met the coach again. From the data, it was found out that maximum load of fan was mostly exceeding 39.5Amp.

Coach asked, “Are you sure that data is recorded correctly? Did you check the Ammeter calibration?”

Suresh replied, “These readings are recorded by field operator and it may not be accurate as the ammeter is not digital”.

Coach asked them to check the ammeter again. Team again visited the CDU and compared the ammeter with the source ammeter (from where the power is supplied to CDU). It was found out that ammeter readings of CDU was not correct. In fact the field ammeter had a multiplication factor which the operators were unaware of. Field operators should multiply the reading on the guage with a correction factor of 0.83. The team, based on this information, corrected the data. After correcting the data, team found out that load of fan was not exceeding 39.5 Amp.

Team further calculated the power consumption of both FD fans. A graphical summary is given below. 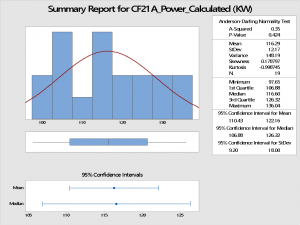 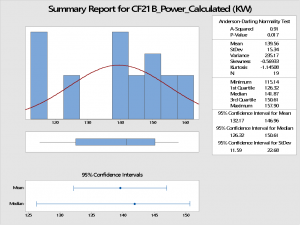 Figure 2: A graphical representation of “Energy consumed by CF21B FD fan” P value: 0.0017 => Data is not normal => Median is right metric to summarize the data

You can note that CF21B had higher power consumption. The team had to find out why?

Team discussed the issue with stakeholders and populated a Fishbone diagram with all the probable causes.

After detailed analysis of all probable causes, following causes were found out.

The Team also created an elaborate fish bone diagram. For easy reading, we have broken it into parts. 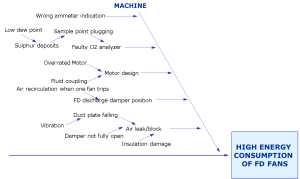 Team further collected data to validate causes. The data analysis is as follows: 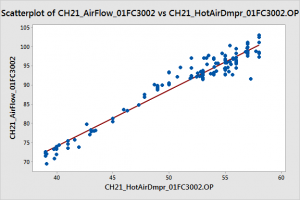 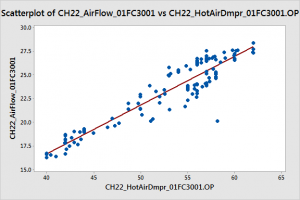 Equation for energy balance across steam coupled APH is as follows:

Air flow transmitters with indications in DCS for Detection of Major Air leakages was recommended.